It is with great sadness that we announce the passing of Marhoom Al-Hajj Mir Ahmad Farid Talebi. The Marhoom will be laid to rest on Thursday, April 23rd, 2020.

On behalf of the Imam Ali Masjid community, we would like to convey our deepest sympathies and condolences to the family of the Marhoom. InshaAllah, upon the clearance of the social distancing and stay at home orders, arrangements to pay respects to the bereaved family will be announced.

All are requested to remember the Marhoom with the recitation of Surah al Fatiha and Salat al Wahsha tonight.

Salat al Wahsha is recommended that on the first night of burial, after Isha prayer. The method of performing this prayer is as follows: In the first rakʿah after reciting Sūrat al-Ḥamd, Āyat al-Kursī  is recited once; and in the second rakʿah after reciting Sūrat al-Ḥamd, Sūrat al-Qadr is recited ten times; and after the salām of the prayer, the following is said:

Oh, Allah! Bless Muḥammad and the progeny of Muḥammad, and send the reward of this prayer to the grave of ____.

In the blank space, one should say the name of the deceased person.

The Imam Ali Masjid Ramadhan 2020 Prayer TimeTable is now available for download and print. It is attached as a PDF document. 2020-Ramadhan_TimeTable_Rev0 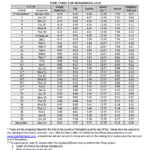 Join us live on Friday, April 10th at 8:15pm EST to celebrate the birth anniversary of Imam Mahdi (ajtf) with poetry by Brother Nouri Sardar, and lecture by Sayed Mahdi Qazwini, followed by more presentations, games, and prizes.

The event will be live on Zoom and YouTube: 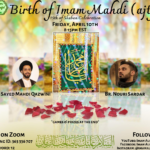 In the best interest of our community at this time, we will be suspending all programs at the masjid due to the current virus outbreak. The following are changes to the regular programming:

Sunday School: Students will be contacted by their teachers to continue their lessons online until further notice.

Dua Kumayl Program: The Thursday night dua kumayl program will be live streamed at 8pm on Thursday until further notice.

Also, in these challenging times, we ask all brothers and sisters to remain vigilant and increase the supplications to ease the hardships upon humanity. It is recommended to recite Ziyarat Ashura and Ayat al Kursi daily for protection from evils and illnesses.

We apologize for any inconvenience this may cause and request you to please continue to exercise precaution in your day to day activities.

The World Health Organisation (WHO) has standard recommendations for the general public to reduce exposure to and transmission of a range of illnesses. These include hand and respiratory hygiene, and safe food practices:

Please keep us and all people around the world in your prayers during this time. May Allah bless you all. 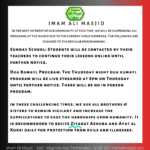 Join us to celebrate the birth anniversary of Imam Ali (AS) on Sunday, March 8th, 2020 at 1pm. The program will begin with Dhuhr and Asr prayers, followed by recitation of Quran, English lecture by Sayyid Atiq Ebady, and concluding with poetry and presentations. See the flyer below for more information. 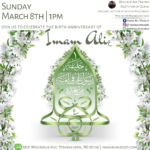